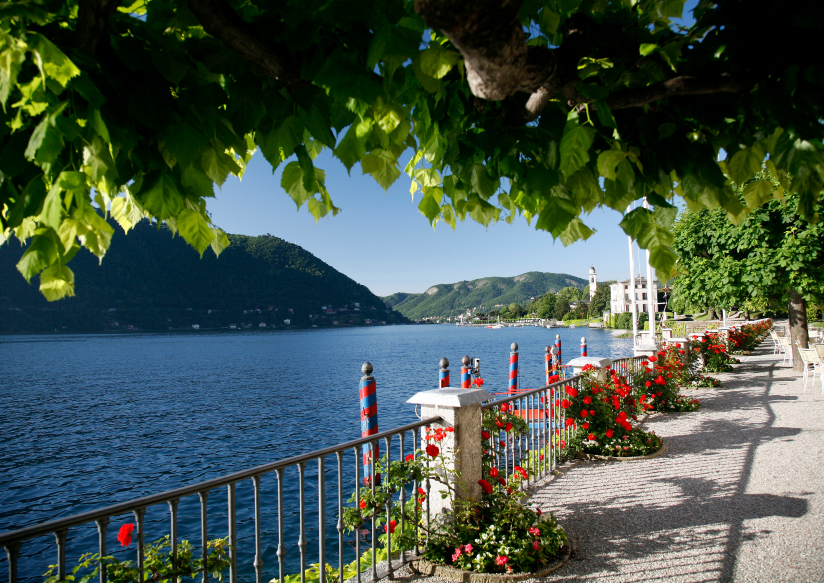 It has 4 bedrooms, 2 double rooms with balconies, 1 double and 1 single room so it will actually sleep 7 but is better suited for 6 people.

There is an outside terrace area with seating for 8 people and the garden has a view of the lake and is equipped with seating and sun loungers.

There 2 bathrooms, a large one with a toilet, bidet, basin, bath and shower and a second wash room with toilet and sink. The house has superb character.

Carate Urio is superbly located to give easy access to Como town and is an excellent base for a Lake Como holiday.

Further details indoors:
It has 4 bedrooms, 2 double rooms with balconies, 1 double and 1 single room so it will actually sleep 7 but is better suited for 6 people.

There 2 bathrooms, a large one with a toilet, bidet, basin, bath and shower and a second wash room with toilet and sink. The house has superb character.

There is a fully fitted kitchen with fridge freezer, dishwasher, electric cooker and gas hob.

Further details outdoors:
Parking is located 20 metres away alongside the small marina.

The superb climate of Lake Como and the convenient location make this an ideal location for all types of holiday from relaxation breaks to water and snow sports action packed holidays.

Carate Urio is a comune (municipality) in the Province of Como in the Italian region of Lombardy, located about 45 km north of Milan and about 6 km northeast of Como. It has a population of 1,222 and an area of 6.9 km².

Lake Como (Lago di Como) is one of the famous Italian Lakes destinations, not far from Milan in the north of Italy. Lake Como is long (50km), slender and extremely deep. The southern end forks into two long ‘legs’, with the picturesque town of Bellagio situated on the promontory between them.

Like the other Italian Lakes, Lake Como has been popular as a resort since the days of the Roman Empire. Visitors ever since have admired the blue waters and relaxed in luxurious villas in the wooded lakeside slopes above. Today, most of the towns around the shores of Lake Como are popular with tourists, cyclists and swimmers.

Get there
Como is on Italy’s main railway network, and trains run from Milan to Como frequently, taking around 40 minutes. They depart from Milan’s Stazione Centrale and Stazione Porta Garibaldi, and arrive at San Giovanni, Como’s main station.

Get around
Steamers, boats and buses serve all the main towns on Lake Como. A frequent boat service connects the central resorts, Lenno, Tremezzo, Villa Carlotta, Cadenabbia, Menaggio, Bellagio and Varenna, including a car ferry. A less frequent but faster boat travels the full length of the lake from Como (with stops at most of the above). Buses run approximately hourly all the way up the west coast from Como round to Colico at the north-east.

Lake Como (Lago di Como in Italian, also known as Lario; Lach de Comm in Insubric; Latin: Larius Lacus) is a lake of glacial origin in Lombardy, Italy. It has an area of 146 km², making it the third largest lake in Italy, after Lake Garda and Lake Maggiore. At over 400 m deep it is one of the deepest lakes in Europe and the bottom of the lake is more than 200 metres (656 ft) below sea-level.

The lake is shaped much like the character “Y”. The northern branch begins at the town of Colico, while the towns of Como and Lecco sit at the ends of the southwestern and southeastern branches respectively. The small towns of Bellagio, Menaggio and Varenna are situated at the intersection of the three branches of the lake: a triangular boat service operates between them.

Lake Como is fed in large part by the Adda River, which enters the lake near Colico and flows out at Lecco. This geological conformation makes the southwestern branch a dead end, and so Como, unlike Lecco, is often flooded.

The mountainous pre-alpine territory between the two southern arms of the lake—between Como, Bellagio and Lecco—is known as the Larian Triangle, or Triangolo lariano. The source of the river Lambro is here. At the centre of the triangle, the town of Canzo is the seat of the Comunità montana del Triangolo Lariano, an association of the 31 municipalities which represent the 71,000 inhabitants of the area.

The lake’s name in Latin is Larius, Italianized as Lario, but this name is rarely used; it is usually called Lago di Como (literally “Lake of Como”).

The lake is well-known for the attractive villas which have been built here since Pliny the Younger constructed the Comedia and the Tragedia. Many have admirable gardens which benefit from the mild climate induced by the stabilising presence of 22.5 km³ of lake water and are able to include tropical as well as temperate plants.

The Villa Carlotta was built for the Milanese marchese Giorgio Clerici in 1690 and occupies a site of over 70,000 m² at Tremezzo, facing the Bellagio peninsula. An Italian garden, with steps, fountains and sculpture was laid out at the same time. The villa was later sold to the banker and Napoleonic politician Giambattista Sommariva. Stendhal was his guest in 1818, and his visit is recalled at the start of La Chartreuse de Parme. In 1843 it was purchased by Princess Marianne of Nassau as a wedding present for her daughter Carlotta, after whom the villa is now named. The latter, together with her husband, Georg II of Saxen-Meiningen laid out the wooded park in the Romantic style. The villa today includes a museum of agricultural implements as well as important works of sculpture by Sommariva’s friend Antonio Canova and by Luigi Acquisti.

The Villa d’Este, at Cernobbio, was built in 1568 by Cardinal Tolomeo Gallio, a native of the town. In 1816–17 the villa was home to Caroline of Brunswick, estranged wife of the Prince of Wales and shortly to become Queen Consort of King George IV of the United Kingdom. The landscaped gardens in the English style are a product of this period. Later in the century it was turned into a luxury hotel. Today the Villa d’Este is known for attracting celebrity guests.

The Villa del Balbianello, famous for its elaborate terraced gardens, lies on a promontory of the western shore of the lake near Isola Comacina. Built in 1787 on the site of a Franciscan monastery, it was the final home of the explorer Guido Monzino and today houses a museum devoted to his work.

The Villa Melzi, at Bellagio was built in the neo-classical style by the architect Giocondo Albertolli in 1808–10 as the summer residence of Francesco Melzi who had been vice-president of the Napoleonic Italian Republic. The park includes an orangery, a chapel, statues and a Japanese garden, and is planted, as often on lake Como, with huge rhododendrons. Nineteenth-century guests at the Villa included Stendhal and Franz Liszt.

The Villa Serbelloni, also at Bellagio, houses the Bellagio Study and Conference Center, a residential center set up and managed by the Rockefeller Foundation since 1959, which operates a ‘scholar-in-residence’ program for scholars from around the world. This is believed to have been the site of Pliny the Younger’s villa ‘Tragedia’. Its well-known park was created at the end of the eighteenth century by Alessandro Serbelloni.

The Sacro Monte di Ossuccio (‘’Sacred Mount of Ossuccio’’) is located on a hillside slope between olive groves and woods along the western edge of Lake Como facing Isola Comacina. Fifteen Baroque inspired chapels, built between 1635 and 1710, and dedicated to the Mysteries of the Rosary are dotted along the way that leads to the Monastery. This building is the last in the chain and is dedicated to the Coronation of the Virgin. In 2003, the Sacri Monti of Piedmont and Lombardy, including that of Ossuccio, were inserted by UNESCO in the World Heritage List.